This is the Navigation Sidebar

NOTE: This page is a concept preview for a future wiki page for model family specs and as a hub for related content. 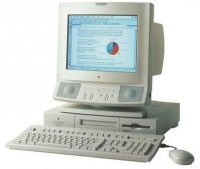 The Power Macintosh 6100 was the low end member of the initial Power Macintosh family, introduced in 1994, alongside the 7100 and 8100. These machines all have PowerPC 601 processors and internal expansion via 601 PDS and NuBus slots.

The 6100 has a mostly standard complement of beige Mac ports, minus the unique HDI-45 port used for the AudioVision monitor.

The Power Macintosh 6100 onboard graphics allocates 640 kilobytes of system memory to a graphics output that can achieve up to 832×624 resolution at 256 colors, via an HDI-45 port, which can connect to an adapter to a normal Macintosh DA-15 connector, or to the Apple AudioVision 14 display.

The 6100 has one externally accessible 5.25-inch storage bay, commonly filled with a CD-ROM drive, and one PowerPC PDS slot, typically accompanied by a riser to accomodate either one 7-inch NuBus slot or PDS cards such as those used by the 7100 and 8100.

The stock options for this slot include a DOS compatibility card known as Houdini 2 and in AV models, a card with a 2-megabyte graphics adapter and analog video input and output.

The 6100 isn't a low end machine per se, it was just the low end of the introductory PowerPC family. Apple introduced new 68k models after these were introduced, and so in total it stood close to the middle of the Mac family.

Except where otherwise noted, content on this wiki is licensed under the following license: CC Attribution-Share Alike 4.0 International